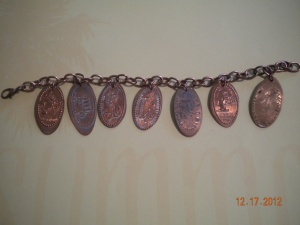 We all have them, a cup or folder full of “smashed pennies”.  Why wouldn’t we…what a bargain!  For two quarters and one penny, that’s just $.52 you can take home a souvenir of most attractions.  You know what I am talking about, the machine where you pick the image and put in your two quarters and the shiniest penny you can find.  You then fight over who gets to turn the crank and out pops a “smashed penny.”  If you were lucky, you thought ahead and had a pocket full of change and there was no fighting over which image you used or who got to turn the crank.  Everyone got a turn and you had tons of pennies when the vacation was over.

I recently saw this idea on Pinterest, to make a charm bracelet with the pennies we had collected over the years.  I went to the cup in the kitchen where I remembered seeing them and came up with 7 different locations.  I thought it would be “neat” (does anyone say that?  Well, Uncle Si* probably does!) to make my daughter a charm bracelet for Christmas.  So, off I went to Hobby Lobby with my new “app” downloaded on my phone. Now I don’t have to cut out those pesky coupons, I just show them my Hobby Lobby “app” with the coupons already loaded.

I bought a package of jump rings for $1.47 and a 30″ copper necklace (probably just copper color) for $3.47 and then used my 40% off coupon.  You can see this is was an inexpensive gift.  I put the necklace around my wrist and cut it off the size I thought looked good.  I’m sorry I didn’t measure, but everyone’s wrist is probably a different size anyway.  I didn’t add anything where I cut off the necklace, it just hooks into the links of the necklace.  I then found the middle of the bracelet and that is where I placed my first “charm”.

You will need a small hammer and a “pointy thing” to make the hole in the coin.  I use my scrapbook “awl”.  I really don’t know the proper term for that tool.  I put the coin on my cutting mat so I didn’t poke a hole in my desk.  Just pound a hole where you want it in the top of the coin and then work the “awl” in until the hole is big enough for the jump ring.

Now use a pair of needle nose pliers to bend the jump ring open and insert your coin.  I really didn’t get a good close up picture of this, but you get the idea.  Place your “charms” evenly on the bracelet.  This is a really easy project and it clears out some of your “hoard”.  Although my daughter got the charm bracelet, I have to admit that the pennies were probably my son’s, since the “Ripley’s Believe It Or Not” had a dinosaur on it and that would have been his choice.  I think she thought is was pretty “neat”.