Doesn’t this look sooooo good!  My niece made it for Easter this year and I made it last weekend for my daughter to take to a brunch.  She was in town for a wedding and the girls got together to catch up on “ole times” the day after the wedding.  She said the salsa was a big hit with the kids since the pieces were cut really small.  The children were all under the age of 4.  I really think this would be great to take to a Summer picnic.

it calls for (but I didn’t use near that much)

In a large bowl add all the salsa ingredients.  Kiwi, raspberries, apples, strawberries, white sugar, brown sugar and fruit preserves and mix well.  Cover and chill.  The longer this sits the more juice it produces.  You should make it the day you are going to serve it, but I did eat the leftovers up to two days later.  I just had to use a slotted spoon. 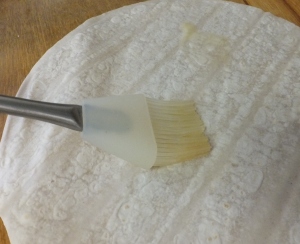 Melt the butter ( I used a half of stick).  Brush it on one side of the tortilla. 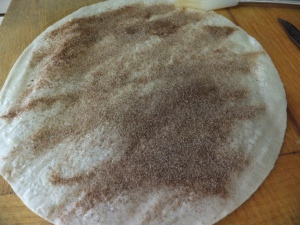 Sprinkle the buttered tortilla with cinnamon sugar.  Cut the flour tortilla in 8 wedges.  Place the wedges on a cookie sheet in a single layer and bake at 350 degrees for 8 to 10 minutes.   This step does take some time to complete.  You could also use cinnamon graham crackers or cinnamon pita chips if you are in a hurry.

Serve with your fruit salsa.

We pinned this recipe and the original site was   http://thethreadaffect.com