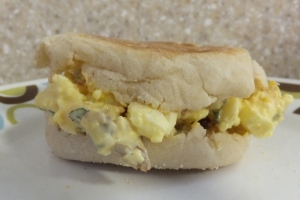 I am trying to “Think Spring” and with Spring, we will be celebrating Easter.  I am always in need of ways to use up all those boiled eggs and I just came across this amazing Egg Salad at www.bunsinmyoven.com.  She said, “not the baby type”, she likes to bake.

Yes, I know it calls for 6 eggs, but my hubby ate one before I got the salad made!

After you boil and peel the eggs, place them in a bowl and mash them with a fork.

In another small bowl mix, mayo, mustard, vinegar, parsley flakes, salt (I thought mine was a little too salty) and  pepper. 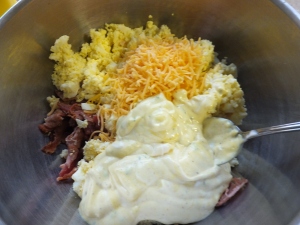 Add the bacon, cheese and the mayo mixture to the mashed eggs!

I had my first sandwich on muffin and enjoyed it with a glass of OJ for breakfast.  It was wonderful!  Someone suggested grilling it and adding some lettuce and tomato.  I might give that a try next time around.  “Hop” on over to www.bunsinmyoven.com and check out all of her other goodies.

Add the eggs to a medium sized pot and fill with water to 1 inch above the eggs. Bring the water to a boil over medium heat. Remove from the heat, cover with a lid, and let sit for 15 minutes. Run the eggs under cold water or place them in an ice bath until cold. While the eggs are cooling, chop the bacon into bite sized pieces and fry until crisp over medium heat. Drain the fat and set aside the bacon. Peel the eggs and mash them finely with a fork. Add the mayonnaise, mustard, vinegar, parsley, salt, and pepper and stir to combine. Stir in the bacon and cheddar. Serve as a dip with crackers or between bread as a sandwich.

This is proving to be one of my favorite blocks.  I paper pieced this block.

This is the back of the block and the layout for block #19.  You can see I used colored pencils so that I could see where to place each of the fabrics.

I did not take pictures when I made this block…sorry!  I did fussy cut the center and used my “bucket list” fabric. 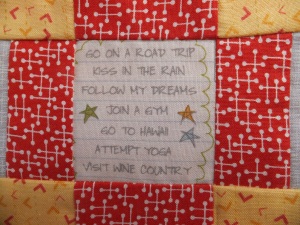 I really need to step it up on these posts.  I am hoping Spring will get me motivated!!

I will be posting some items from our Paris Theme baby shower in the next few weeks.  The first thing I did for the shower was make these adorable tea lights to use on the tables.  I started out with a  clear mason jar.  I then found this great burlap Paris ribbon at Hobby Lobby.  The burlap fit right in, since we were using burlap in the nursery. 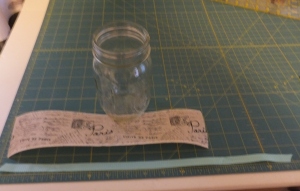 The color scheme for the shower was the same as the nursery (coral, mint green and metallic gold).  I also purchased mint 1/4″ ribbon at JoAnne’s.

Plug in your hot glue gun and position the front of the mason jar over the word Paris.

Fold over the raw edge of one side of the ribbon and apply the hot glue.  (It is hard to see in this picture) Be very careful not to burn your fingers!

I purchased this decorative glass at JoAnne’s.  It was gold metallic and fit with our color scheme. 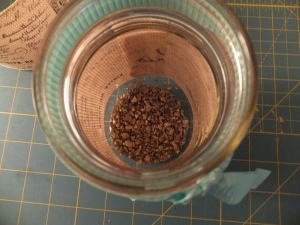 I just added a small amount of the glass to the bottom of the jar before I dropped in my votive candles.

I then tied the mint ribbon in a square knot on the top of the jar.  Simple and cute!  I also sent them home with the guests so that they would have a keepsake of the shower.

Grandparents with the new Mama